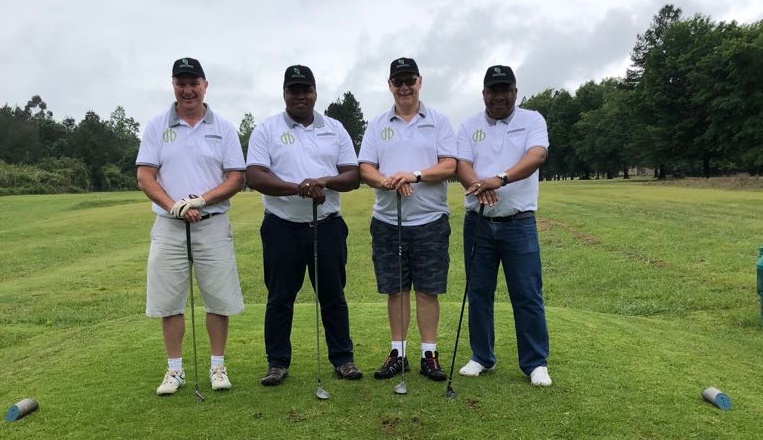 A DAY OF UNITY

The point was to show that regardless of position, each person is valuable and contributes to a company’s success.

At times the ball was hit forwards but, to our amazement, landed just behind us. This is how things go when we try out something new and refuse to take ourselves too seriously.

Dolphin Bay is delighted to have continued being the main co-sponsor of the Dolphin Bay Montigny Golf Day, held at Usuthu village, outside Mbabane in Swaziland on Saturday 3 November.

Of the 72 players at the event, 52 were from Montigny and 20 were from the other sponsors’ companies. Many had never wielded a club before.

“It was a day of hits and misses, lots of fresh air, and fun and laughter,” said Dolphin Bay’s Mark Duckham, who was delighted to get in a round. “The wonderful thing is that everyone had fun.

“For us, the point was to say ‘Thank you’ to Montigny for their support and to get people who would not normally play golf involved. It is on a playing field that people’s characters can come out and where we can connect with clients on a different level, as human beings and not just business people.”

Montigny is a reputable and highly-respected company, and a loyal client of Dolphin Bay’s. Starting small, they have grown in leaps and bounds over the years.

“The golf day was really wonderful,” said Montigny MD Ward Rijkenberg. “The highlight was looking around and seeing the smiles on everyone’s faces. It really highlighted the unity in the team.

“We want to thank Dolphin Bay, not only for the golf day but also on the business side, because you guys are role models for how companies should work with and assist their customers.”

“We are extremely pleased about this development,” said Bertus. “We believe governments around the world would benefit from including ethical and respected business people in positions of strategic leadership.

“Our best wishes go to Neal in his new position. He truly is a person of great integrity, and we are confident he will add significant value to the Swaziland government.”