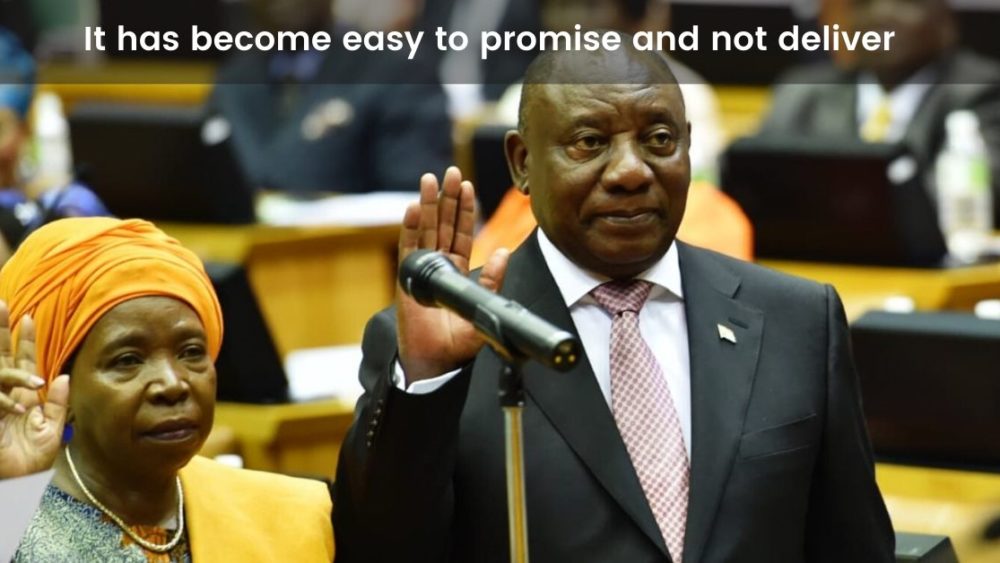 The government has reneged on its promises to pay out tax claims monthly to help businesses to survive.

In fact, in our experience the South African Revenue Service is now being obstructive, repeatedly asking for additional information in response to our queries and questioning our VAT payments at unprecedented length – evidently to delay, rather than expedite, any pay-outs.

This comes during a period of financial duress, as companies have been obliged to pay VAT on imports and other purchases, while lockdown forced a stop to all business activity. The government’s failure to fulfil its promises is false advertising and in bad taste – yet another example of politicians failing to deliver on wonderful promises.

Many small and medium enterprises have been told that government’s funds have run out, after these businesses jumped through hoops in applying for the promised bailouts, and many impoverished communities are not getting the food parcels promised to them. Little to no support is given to larger companies. I like to give the government the benefit of the doubt but it’s becoming harder and harder to do so. The bottom line is that the authorities are betraying their citizens. It’s enormously frustrating and disappointing.

We now know that the government’s lockdown regulations are irrational and lack a scientific base, as recently revealed in a court ruling. Things have reached the point that South Africans are justified in feeling suspicious of every decision the government makes.

The poor example government has set has destroyed business confidence – the largest figures show it has dropped to a record low – to the great detriment of the markets.  When President Cyril Ramaphosa was elected, the Rand strengthened to R11 to the Dollar, showing the markets’ hunger for proper leadership and promising an era of confidence.  If the Rand’s value had stayed there, it could have had a hugely positive impact on South Africa’s credit rating and on job creation.

“It’s as if the baker has fallen asleep behind the bench while the raw ingredients start to expire.”

However, the president is not living up to expectations and, over time, the Rand’s value eroded dramatically again.

Our government seems neither pro-wealth nor pro-poor. Its actions in blocking business and economic activity make no sense, nor do those of the unions in preventing people from returning to work.

While the government is obliging us all to follow the rules – and the police have violently enforced lockdown regulations – it is setting an extremely poor example of responsibility itself. Maladministration at municipalities is so dire, their infrastructure falling apart, that we need a social uproar to get it fixed. State-owned enterprises such as SAA are continuing to receive unaffordable bailouts, while nobody is held accountable for corruption or maladministration.

To uplift society, South Africa needs businesses to thrive. Why is government sabotaging the well-being of its citizens?

It evidently lacks backbone in its fear of offending certain groups. However, we need to be careful. Things are changing incrementally for the worse.

In the absence of a good example from government, business needs to take a stand, and say, “I need to be different – I shall set an example myself.” We must try to make a positive impact on those we’re in contact with, to provide a buffer for them where possible. We must voice our discontent with unfulfilled promises and build up a momentum of dissatisfaction – one that we hope will eventually depose those institutions acting to the detriment of society and prohibiting growth and prosperity.

Things have reached the point that a movement to withhold tax might be the best way to take this stand.

Our country still has all the raw ingredients to make good things happen, but the opportunities are being ignored. It’s as if the baker has fallen asleep behind the bench while some of the ingredients start to expire.