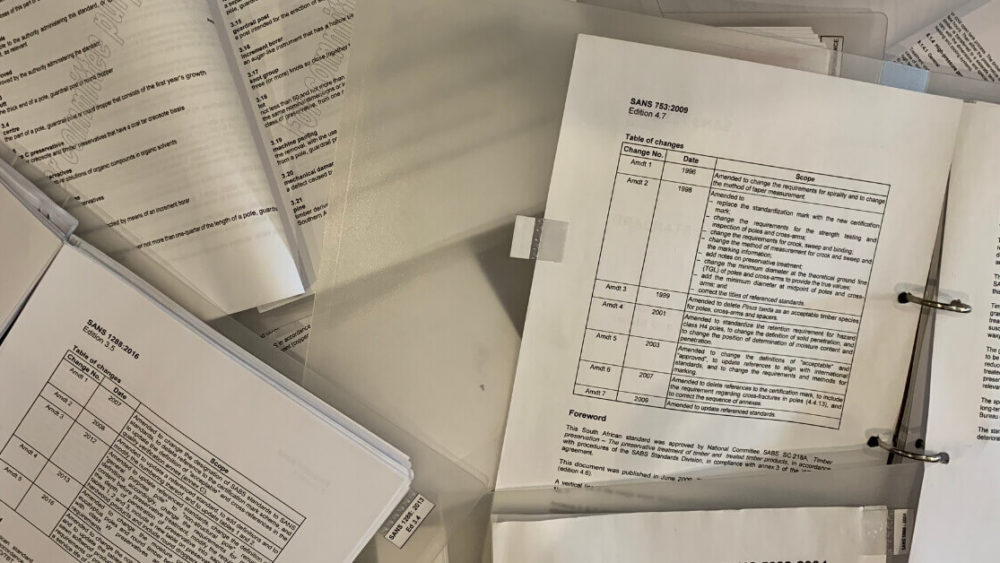 Our industry has been consolidating, simplifying, and updating the specifications governing wood treatment, in a massive undertaking expected to be finished by the end of July this year.

The revisions will streamline the process for future amendments, which is important because timber treatment standards are revised regularly. Standards are reviewed every five years and ideally, they should be revised when needed.

The new version of the standards will also resolve grey areas, hopefully make the standards much easier to understand for new members, get rid of numerous duplications that caused some contradictory interpretations, and help clear up misunderstandings about the mandate of the NRCS.

The process began in 2015, when an industry working group was appointed by the SABS Technical Committee, convened by SAWPA Executive Director Bruce Breedt. “It has been several years, but we’re close to completion now,” he said.

The new specifications will also aim to close legal loopholes that have led to abuse by some companies using them to produce and sell reject poles. Poles are treated according to SANS 1288, and then end up being used for structural purposes, for which they are inadequate. They are likely to fail prematurely.

David Stone, Operations Director of Yonder Lea Timber, has pointed out that such poles are being sold for structural purposes in many areas of the Eastern Cape. They are known to be sold in other parts of the country, too.

The poles are “flooding the market”, taking away business from suppliers of correctly graded structural poles, as these poles are 20% cheaper.  “Customers are being blind-sided into purchasing these inferior poles,” says David.

The new version of the standards resolves grey areas, makes standards easier to understand and gets rid of numerous duplications that caused some contradictory interpretations.

The reject poles are labelled due to a provision of SANS 1288 that caters for the treatment of ungraded poles that are intended for an aesthetic rustic look, and an end user who is aware they are not load-bearing poles. The retailer needs to be informed that the poles are not suitable for structural purposes. This is not being done in the cases that David and others have reported.

In the revised standards, a clear distinction is made between structural load-bearing poles (SANS 457-2/3) and non-structural poles (SANS 1288).

The revisions will reduce large amounts of duplication. Previously, there were separate specifications for every commodity standard, with a column for treated poles in each. Structural and decking timber fell under SANS 1288, and SANS 10005 was a guidance document on timber preservation requirements, which contained other specifications addressing the chemical, procedural and handling requirements.

There were also separate specifications for softwood poles and eucalyptus poles for power distribution and communication. When any one aspect of the relevant standards had to be amended, a host of other standards needed amending too.

The new specifications also aims to close legal loopholes that have led to the abuse around the production and sale of reject poles.

All treatment requirements are now being grouped under SANS 1288, which will contain tables differentiating the specs for sawn and round timber. This standard will address everything from the required moisture content before treatment, to the measurement of wood preservative chemicals and how to ensure adequate penetration and retention levels.

It is important to note the pole standards, i.e. SANS 457-2, SANS 457-3, SANS 75 3 and SANS 754 will remain. They will include the physical and material requirements and limitations, and will also stipulate that preservative treatment will be in accordance with SANS 1288.

SANS 10005 will now address lists of approved preservatives, processes to be used, and the handling and safety requirements. This standard will also specify when and where softwood and hardwood species shall be treated if used in structures.

It is the mandate of the NRCS to enforce compliance with the preservative timber treatments covered in the standards, but not the other requirements that address physical and material requirements. There has been confusion about this in the past, and the hope is that the revised standards will help clarify the NRCS’s responsibilities, as there have been some isolated instances where it was believed the NRCS inspectors were overstepping the mandate of the organisation.

“The industry as a whole has taken charge of this huge improvement in standards, and the fact that we have been permitted to do so shows the extent of authorities’ trust in us,” said Bertus.

“We commend SAWPA and the teams for overseeing and coordinating this arduous but hugely valuable process.”