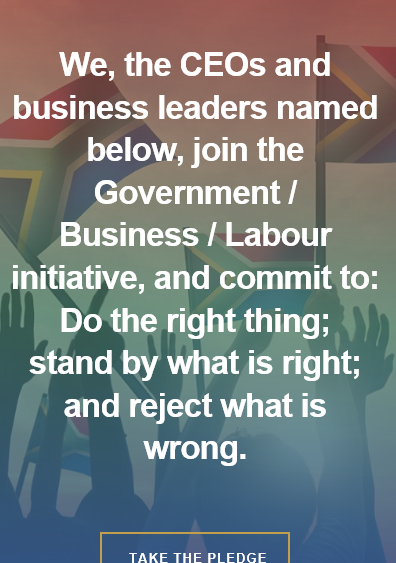 Dolphin Bay is very proud of the leadership that the National Business Initiative, of which we are a member, is showing in efforts to safeguard our economy and the democratic institutions of South Africa.
In one of the most recent steps, the NBI is the secretariat to the CEO Initiative, which has launched a Pledge on which business leaders can take a stand on ethical leadership. Dolphin Bay was one of the early signatories to this pledge, which has now been signed by almost 200 business leaders.
The CEO Initiative itself sprang out of the events of late 2015, when our country faced a deep crisis of investor confidence. Government, business and labour then came together to put measures in place to stave off the threatened credit ratings downgrade and create a more inclusive economy.
Representing NBI and other business groupings, the CEO Initiative saw 90 CEOs starting to work with unprecedented urgency alongside the Minister and Deputy Minister of Finance, and the National Treasury, to stave off a ratings downgrade, and to stimulate inclusive and sustainable growth in the medium term.
The first version of the pledge launched by the CEO Initiative, and the version that Dolphin Bay signed, was initiated after the NPA announced its charges against Minister of Finance Pravin Gordhan. At the time, the Pledge provided a platform on which business could publicly stand against these charges, as well as against “the damage this has caused to our economy and the people of South Africa, especially the poor.”
The signatories also took a stand “against corruption and injustice, including the failure to investigate and prosecute prima-facie wrong-doing.”
After subsequent events, including the withdrawal of charges against Pravin Gordhan, the Pledge has become a broad-based commitment to ethical conduct. It is now available for all business leaders to sign on the website www.ceopledge.co.za, and states: “We, the CEOs and business leaders named below, join the Government / Business / Labour initiative and commit to: Do the right thing, stand by what is right, and reject what is wrong.”
The Pledge website describes the collaboration between business, labour and government as “a truly unprecedented partnership, proving once again what South Africans are capable of when we put our differences aside and work together towards a common goal.”
Says Bertus: “History shows us that bad things happen when good people do not act in time to prevent them. We are impressed how the NBI takes a proactive role in helping to bring about the society we all wish to live in, and are pleased that we can play a part in these efforts.
“The NBI works behind the scenes some of the time, but is continually taking initiative and engaging with all the necessary parties to help address all the challenges South Africa faces, from threats to our economy to unemployment and climate change.
“Through stories in the Dolphin Bay Brief, we will continue to tell our readers about the excellent work that the NBI is doing.”