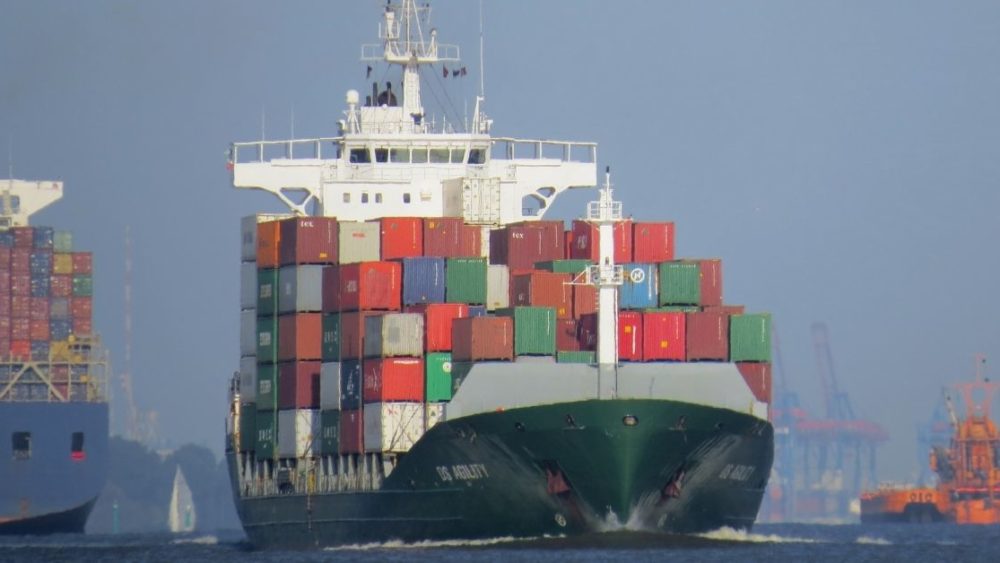 The shipping industry transports 80% of the world’s cargo, providing the backbone for our era of globalised trade.

Yet shipping is still run in a cumbersome and old-fashioned way: bills of lading are still issued on paper and couriered around the world rather than sent digitally, and large inefficiencies exist in the supply chain.

Blockchain technology is gradually being introduced to digitise bills of lading and other processes. However other improvements – including the much-anticipated development of automated ships – could take much longer.

Meanwhile, exporters of commodities and other niche goods are facing soaring shipping costs.

The shipping industry is often described as old-fashioned “even by the biggest players themselves,” said Dolphin Bay’s Chief Operations Officer Thinus Ferreira.

There are reasons for this lack of evolution. A ship built today has a life cycle of decades, and investors need to realise their capital over this time. New infrastructure cannot be introduced as quickly as in many other industries.

Another reason for slow change is the consolidation of market players in recent years. Currently, four shipping lines manage 60% of the market, lessening competition and the need for disruption. Market consolidation affects costs, too: competition is low, so shipping lines are able to hike their rates as demand for goods soars in a post-pandemic-lockdown era.

Shipping, along with all other industries, is under pressure to slash its carbon emissions. Automated ships could be a way of achieving this but will take time to introduce.

A ray of light comes with the power of blockchain to dramatically improve efficiencies. Maersk and IBM have developed a platform that applies blockchain to the supply chain, for use by the entire global shipping system. This platform will also use other cloud-based, open-source technologies including artificial intelligence. The project aims to provide more transparency and simplicity in the movement of goods across borders and trading zones.

The World Economic Forum has said that reducing barriers within the international supply chain could increase global trade by 15%, boosting economies and creating jobs.

“Blockchain is going to change things,” said Prof Johan du Plessis of Logistics International South Africa in an interview with the Dolphin Bay Brief, “although once the companies developing the platforms are sure they have it right, they will need to convince banks and other traders that it is safe.”

Industry experts expect that ‘Big Data’ will also play a powerful role in improving the performance of the maritime industry in the coming years, having transformed other industries from finance to telecoms and healthcare.

Big Data refers to a centralised, cloud-based system correlating vast amounts of data from a multitude of sources, including traditional operational sources and non-traditional sources such as weather patterns and traffic delays.

Another much-anticipated change is the advent of more efficient, and even automated, ships and infrastructure. However, this process is likely to be very slow and gradual. Reports indicate that international guidelines and regulations for automated transport are unlikely to be achieved within the next decade, and countries are slow to develop their own long-term plans for automation.

“Automation and automated ships will come in the future, although not the near future,” confirmed Prof du Plessis.

At the same time, shipping, along with all other industries, is required to slash its carbon emissions. The International Maritime Organisation has resolved that by 2030, shipping should reduce emissions by 40% compared to 2008 levels and by 50% by 2050. The industry is under pressure to deliver upon and even improve these targets. Automation could be a way of achieving them.

In the absence of automation, industry insiders fear that to achieve lower carbon emissions, ships will simply have to use less fuel by slowing down – which will exacerbate the delays that already plague sea transportation.

Shipping costs have soared as consumer demand for imported goods has recovered post-Covid-19 lockdowns, bringing shipment volumes far above those of even pre-pandemic levels. While booming demand is to be celebrated, it has supercharged both commodity and shipping prices.

The Baltic Dry Index, which indicates the average price of transporting dry bulk materials across more than 20 routes, has reached 11 year-highs in recent weeks and is at levels between 4 and 5.5 times what it was five years ago. Maritime research consultancy Drewry has predicted that shipping costs will continue to rise for the next two years.

The Baltic Dry Index, which indicates the average price of transporting dry bulk materials across more than 20 routes, has reached 11 year-highs in recent weeks. Costs are expected to continue rising for the next two years.

For the past 15 years, shippers including Dolphin Bay would have had a fixed shipping rate for an entire year. Now, in another cost challenge, shipping lines are giving ‘spot rates’, for a single shipment. “We ship on a weekly basis from ports around the world into South Africa and our costs are vacillating all the time. It’s luck of the draw,” says Thinus.

If exporters are unable to fill the numbers of containers they booked, they are penalised on the remainder, which was not previously the case. Shipping lines generally fill these containers, so do not suffer losses themselves, those in the industry say.

The rates of shipping to different South African ports were stable in the past, but price differences have arisen in recent months. “On a certain week, it might be much cheaper to ship to Cape Town, so we must get our cargo from there,” explained Thinus. “This means that while in the past we had just one warehouse to store our imports, we now need to have warehouses at various South African ports. It’s yet another issue to deal with in the growing complexity of shipping.”

South African shippers face additional challenges in that the country’s ports are among the worst-performing in the world, Prof du Plessis pointed out. Of 550 evaluated by the World Bank, Cape Town rates the highest, at a dismal 347 out of 341 ports.  Durban ranked lowest at number 351, followed by Marseilles (350), Ngqura (349), and Port Elizabeth (348).

However, things are likely to improve, predicted Prof du Plessis. “South Africa is in such deep financial trouble, it’s not funny. We have to keep on trading and to up our game.

“There’s no other way forward but to put money into our infrastructure.”

Shippers must be increasingly informed and nimble to cope with the challenges of transporting their goods, said Thinus. “Let’s take a positive attitude, hoping and trusting that the promised improvement in efficiencies will come about soon, to unblock the bottlenecks and improve pricing. World trade depends upon it.”